The most important job that worms undertake in the garden is to till and aerate the soil. They burrow really deep into the earth, creating channels in the soil that break up clods and allow the air to enter and water to penetrate and also drain away.

Worms eat at the surface and eliminate waste under the ground, in the process they introduce fresh organic material to the subsoil and thus increase the depth of the topsoil. By digesting decomposing organic material earthworms are making the soil more fertile by speeding up the process through which plants can access the nutrients that they need.

Organic gardeners know that the creation and maintenance of good soil structure is very important and that, unlike mechanical tilling equipment, worms do not damage the soil structure. Mechanical tillers can damage the soil by creating hardpans, breaking up the crumb structure or even inverting the subsoil to the surface. Worms cause none of these problems, in addition they never break down, create noise or pollution and they use our garbage as fuel! Earthworms are a great way to get rid of kitchen scraps!

Some people may already have equipment in or around their home that can serve as a worm farm but otherwise DIYers can get started by buying commercial worm farm units, these can be easily be purchased, they are easy to use and can look quite smart as well. It is normal to buy them with a starter supply of worms. Try to get hold of Tiger Worms or Red Worms for your initial stock. 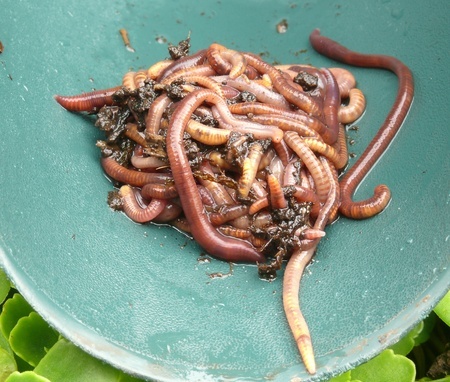 Making Your Own Worm Farm

If you have, or can find a couple of old concrete laundry tubs or sinks then you have the makings of a great wormery or worm farm. Set them up in a shady place near to your propagating area, kitchen door or, with enough room, both places. Set the tubs up above the ground at a convenient height to access the drain holes in the bottom to collect your fertiliser. Remove the plugs and put a strainer into the hole to allow water to drain out without carrying away solid material.

The first tub should be filled up with compost, mixed with a handful of agricultural lime or dolomite and about a half bucket of garden soil. Place a bucket under the plug hole and water the compost mix with a fine water spray until it is saturated and water starts to drip into your bucket.
If you didn't already buy your starter population of worms, now is the time to do so. A tub of 500-1000 Red or Tiger worms will be ideal. You can buy these by mail order, or online, from professional worm breeders but also many garden centers will carry them too.

Next, add your starting stock of worms; then cover the surface with something like old hessian sacking, wet cardboard, old carpet. You are working to create an environment in which worms will do well; they like to be underground in cool, dark and moist surroundings.

Finally, for the installation phase you need to set up protection from flies and other insects. Don't use a close fitting or solid lid as this will suffocate the worms, instead fit a fly-mesh or shade-cloth screen lid.

For the first month there's nothing else to do except to ensure that the wormery remains moist, but not soaking wet. Once your worms are settled in you probably will not need to add more water. If the worm farm is exposed to rain, then make sure that water can flow out of the plug hole in the base of the tub or sink otherwise your worms could drown.

Your compost will feed the worms for quite some time but in order to maximise breeding you should use a supplementary feed every few days, particularly once the population starts to increase. Add a dessert spoon of lime or dolomite to each kilo of added food.
Rotate your worm feeding between the following:

Because worms have no teeth, in general, scraps should be chopped into small pieces, waste from a juicer is ideal, as long as there's no citrus in it. 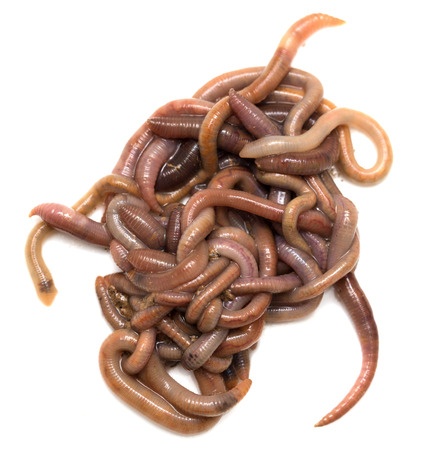 Anything from the onion family (Onions, shallots, garlic, leeks) should be avoided. Worms will literally climb out of their home in order to avoid the small of the volatile oils in these items!

After a few months a healthy tub will be filled with a writhing mass of worms - that's the time to set up a colony in the second tub.

Start the process by half filling the empty tub with the same mixture of compost, lime and soil that you used to make the first colony. As before, saturate the mixture with water.

In the first colony burrow down through the worms and compost to the plug hole and put in the plug. Set up your hose so that it is just dribbling into the first tub until it is about half filled with water.  Replace the hessian over the tub to keep out the light. Whatever you do DON'T FORGET and leave the tub to completely fill or the worms will drown!

The worms will migrate from the sodden compost into the top of the first tub to avoid the water.

Scoop out the worms, keep some aside to put into your garden, and transfer the population into the second tub, their new home.

Place a bucket below the drain of the first tub and remove the plug and let the contents of tub one fall into the bucket. This liquid is a very rich liquid fertiliser and the tub will be half full with worm castings.

From now on you will repeat this process every month or so, transferring out about 30% of your worms into your garden (or maybe feeding them to your chickens?) each time. This will make sure that you have an everlasting supply of high quality liquid fertiliser as well as the rich worm castings to improve your soil.

Your organic plants will thrive as never before!

How To Grow Your Own Organic Fruit and Vegetables
Organic gardening the chance to grow a variety of different healthy foods throughout each season as well as the pride of growing chemical-free food, which can be hard to find in many grocery stores for a low price. Check out this article for some getting started ideas!
Gardening
12.02.2016 · From spanglers

How You Can Make Money With A Worm Farm
Farming worms will keep you well-stocked with young worms that are said to be ideal animals for composting. Worm farming caught the fancy of many investors not realizing that it entails hard work. Many Vermiculturalists failed, but some make a good profit!
Business
11.01.2016 · From Andrew_Facebook

How To Start Organic Gardening
Organic gardening in the truest sense means gardening without the use of any chemical substances, may they be in the form of fertilizers, pesticides, growth enhancers, etc. Some people think that if they use only small amounts of chemical fertilizers they still are...
Organic Gardening
03.11.2015 · From GreenFingers

How To Get Started On Organic Gardening
More and more people are getting into organic gardening because it is more environment-friendly, more healthy, a wonderful pastime and can help them save money by having all the crops they need in the backyard. (...)
Organic Gardening
03.11.2015 · From GreenFingers

How To Fertilize Your Organic Garden
Vital Organic Soil Nutrients Plants that are grown using organic soil are in need of soil nutrients to make the best produce possible. Organic soil nutrients would include phosphorus, sulfur, calcium...
Organic Gardening
03.11.2015 · From Editor
Check My Fiverr Gigs!
andrewfi
Fiverr
Seller
An Englishman abroad - Since 1984 I have been running my own businesses and I've been working with online and real world businesses since 2005 providing online training and marketing services. How can I help you to succeed in what you are doing?
andrewfi
Fiverr
Seller
Celebrating 6 years on FIVERR with 100% satisfied buyers (consultants, agencies and s-m-l businesses). We are committed to render cost effective & valuable services from marketing to business support. You can't beat the original. Try our gigs now!
Ads
Article Info

Organic Gardening
9469 Views
0 Subscribers
All Articles by TheAuthor
Sharing Is Good!
Rate

0 votes
Looking For These?
worms organic gardening compost liquid fertilizer soil worm farm worm castings vermiculture organic gardening
Home
›
Articles
›
How To Create An Organic Worm Farm
About Us Privacy Terms FAQ Invite a Friend Contact Us Write For Us
Copyright © 2023 Andrew Wilson - Knowhow-Now.com. Content is provided by our members and trusted partners. We do not guarantee the accuracy of any such content.
Please, enter a value here
Are you sure?